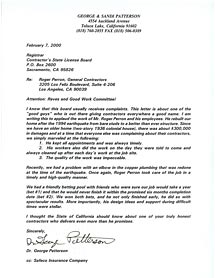 I know that this board usually receives complaints. This letter is about one of the “good guys” who is out there giving contractors everywhere a good name. I am writing this to applaud the work of Mr. Roger Perron and his employees. He rebuilt our home after the 1994 earthquake from bare studs to a better than ever structure. Since we have an older home (two-story 1936 colonial house) there was about $300,000 in damages and at a time that everyone else was complaining about their contractors, we simply marveled at the following:

Recently, we had a problem with an elbow in the copper plumbing that was redone at the time of the earthquake. Once again, Roger Perron took care of the job in a timely and high-quality manner.

We had a friendly betting pool with friends who were sure our job would take a year (bet #1) and that he would never finish it within the promised six months completion date (bet #2). We won both bets, and he not only finished early, he did so with spectacular results. More importantly, his design ideas and support during difficult times were stellar.

I thought the State of California should know about one of your truly honest contractors who delivers even more than he promises.